The Australian Shepherd was used primarily as a sheep herder in the Rocky Mountains because it was relatively unaffected by altitude. Ranchers began breeding the dogs, and as word of its legendary sheep herding abilities traveled, interesting purchasers from across the country to take one home with them. Not only is it successful on the farm, the Australian Shepherd made an excellent addition as a family pet. 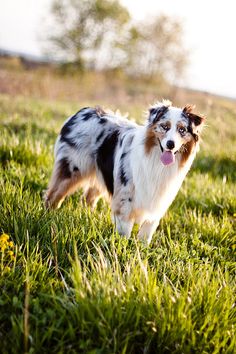 Historians believe that they were bred from dogs that were originally from England and Scotland. Although it is hard to tell the exact makeup of this breed, people speculate that dogs such as the English shepherd, Cumberland sheepdog, and Welsh Sheepdog are a part of its ancestry.

The AKC recognized the Australian Shepherd in 1991.

When it comes to what you should be feeding your Australian Shepherd, owners can make home-cooked meals fresh, using quality ingredients, without preservatives. This can prove to be less expensive than buying the average any-breed commercial pet food.

From my personal experience, with 20+ years raising puppies, Aussie is the best dog I ever had, smart intelligent and yet affectionate, very loyal!

The male Australian Shepherd weighs about 50 to 65 pounds, while the females weigh around 40 to 55 pounds. 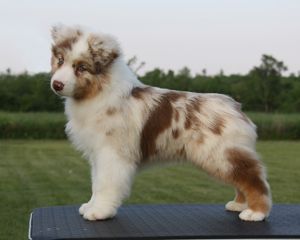 Since this is a working dog, the Australian Shepherd needs lots of activity to be happy and content. The breed is excellent with children, especially when raised from puppies. And because it is a herding dog, the Australian Shepherd will often try to herd kids, pets and other animals, so train early to prevent nipping. This breed also plays well with cats, and is typically not aggressive.

There are some health conditions that may be found in the Australian Shepherd. The more common health concerns include autoimmune disorders, cataracts, Collie Eye Anomaly (also known as CEA) and hip dysplasia.

Australian Shepherds have a life expectancy of 12 to 15 years.

These working dogs need a lot of regular exercise to avoid becoming bored and destructive in the house when left alone. If your Australian Shepherd is left inside for most of the day, they will need to get outside for a few hours if possible, which is where a yard comes in handy. Take at least one or two long, brisk walks per day.

In addition, these dogs need to be mentally challenged when exercising. You’ll find that Australian Shepherds are excellent when it comes to obedience, agility and competitive type training.

The breed is excellent with children, especially when raised from puppies.

The American Kennel Club says this about the breed: “Animated, adaptable and agile, the Australian Shepherd lives for his job, which still involves herding livestock and working as an all-purpose farm and ranch dog. Today, due to the breed’s intelligence and versatility, ‘Aussies’ also excel in AKC events such as agility, obedience and herding.”

The Australian Shepherd sports a thick double coat that consists of a wooly inner coat covered by a longer, wavy to straight waterproof outer coat. In warm climates the inner coat is light, but in colder or damper climates it becomes thicker. The hair on the face and legs is short, while longer feathering will be found on the back of the front and hind legs. The coat colors range from tri-color of black, tan or red and white to solid black, solid red or blue or red merle colors. White markings are often found on the chest, face and feet.

Australian Shepherd puppies should be trained at a young age to avoid the habit of herding children.